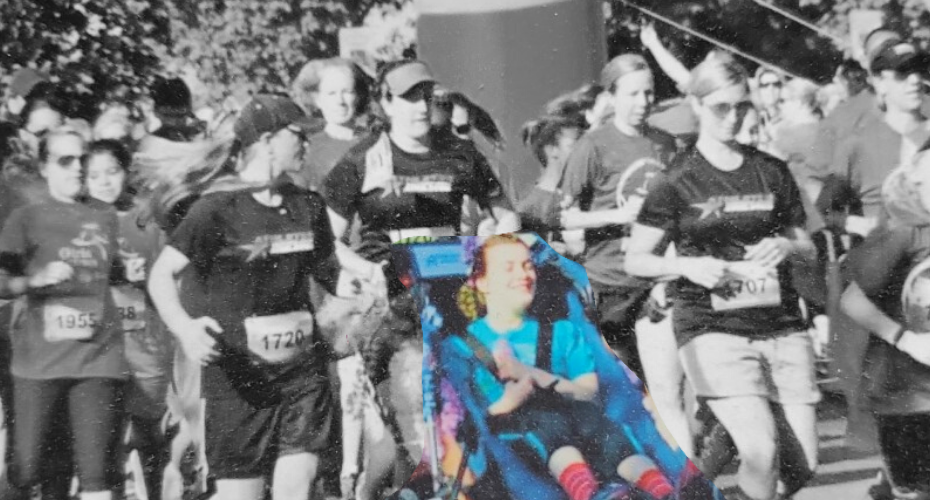 Joy Meenan is a social butterfly, as described by her mom Ann. The soon-to-be 25-year-old volunteers for Meals on Wheels with her Day Program, loves wearing sparkle skirts, and definitely isn’t a morning person. She’s also an ASA Athlete.

Joy joined ASA in 2014 when one of her high school teachers, Christine Johnson, introduced the organization to her students. Christine, who is also an ASA WingMan, was passionate about including special needs students in mainstream activities. Her enthusiasm for inclusion was contagious – it spread through the Cedar Lane School, and soon enough Joy and several of her classmates had joined the ASA Family.

Racing and training quickly became a special part of her routine, because it was something that Joy could participate in outside of her regular school day. It was a place to meet new people and make new friends.

At the end of her first-ever race with ASA, the Maryland Half Marathon, Joy switched from ASA’s signature jogger to her walker to cross the finish line on her own. She was the sole Athlete that participated in ASA’s very first 5k with Girls on the Run, and naturally took command as the star of the race. She brings big emotion to every event.

When COVID hit, Ann was worried about how Joy would react to the dramatic shift of her busy social life to following the stay-at-home order. Surprisingly, she embraced the change and adjusted well to being home and spending quality time with her family.

During the more isolated months, the Meenans played ASA Virtual Bingo and borrowed a jogger for Joy to use at home. While it was nice spending time together, they still had their stressful moments just like the rest of us.

When ASA made the official announcement that Group Runs were returning, Ann decided not to tell Joy immediately. Instead, she stealthily reserved her spot online and on the morning of her first Group Run back, Ann crept into Joy’s room to wake her up and deliver the good news.

And Joy’s reaction to finally being able to reunite with her ASA Family does not disappoint!

“ASA has just made Joy’s life richer, and that’s what you want to see as a parent,” says Ann. “You want to see your child included, happy, and interacting in the community, and ASA does all those things for Joy. It’s been a really wonderful impact on all our lives.”